Generally reserved for when royal monarchs passed away in Medieval times, the phrase “The King is dead, long live the King” was said to signify the immediate succession of power to the new King or Queen.  Following the peak to trough decline of -30% in the S&P 500, which effectively signaled the ending of the 10+ year bull market we were in, the index was able to rebound 21% in the last 7 days of the quarter, leading some pundits to declare that the newly minted bear market was dead and we are now in a new bull market, prematurely in our opinion.  The velocity with which the decline happened and subsequently the speed with which the rebound occurred seemed to be almost immediate.  Here are 3 reasons why we think that we're not quite out of the bear market yet: 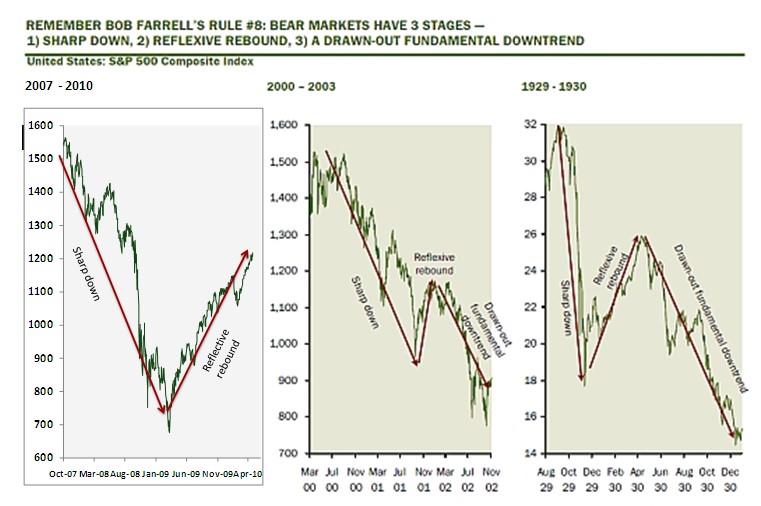 Bob Farrell, a legendary investor at Merrill Lynch & Co. for almost 4 decades, had a collection of rules, almost like the 10 commandments for investing.  Over time, his rules were memorialized and "10 Market Rules to Remember" became a must read for any aspiring investor.  Rule number 3 states that "bear markets have 3 stages - 1) A sharp down, 2) Reflexive Rebound and 3) Drawn-out Fundamental Downtrend."  The chart to the right shows the Dow Jones during the Great Financial Crisis from 2007 - 2009, the Tech Bubble of 2000 - 2003 and the Great Depression from 1929 - 1930.

The saying from Mark Twain, "history doesn't repeat itself, but often rhymes" comes to mind.

The U.S. Lost Nearly 17 Million Jobs in the Past 3 Weeks 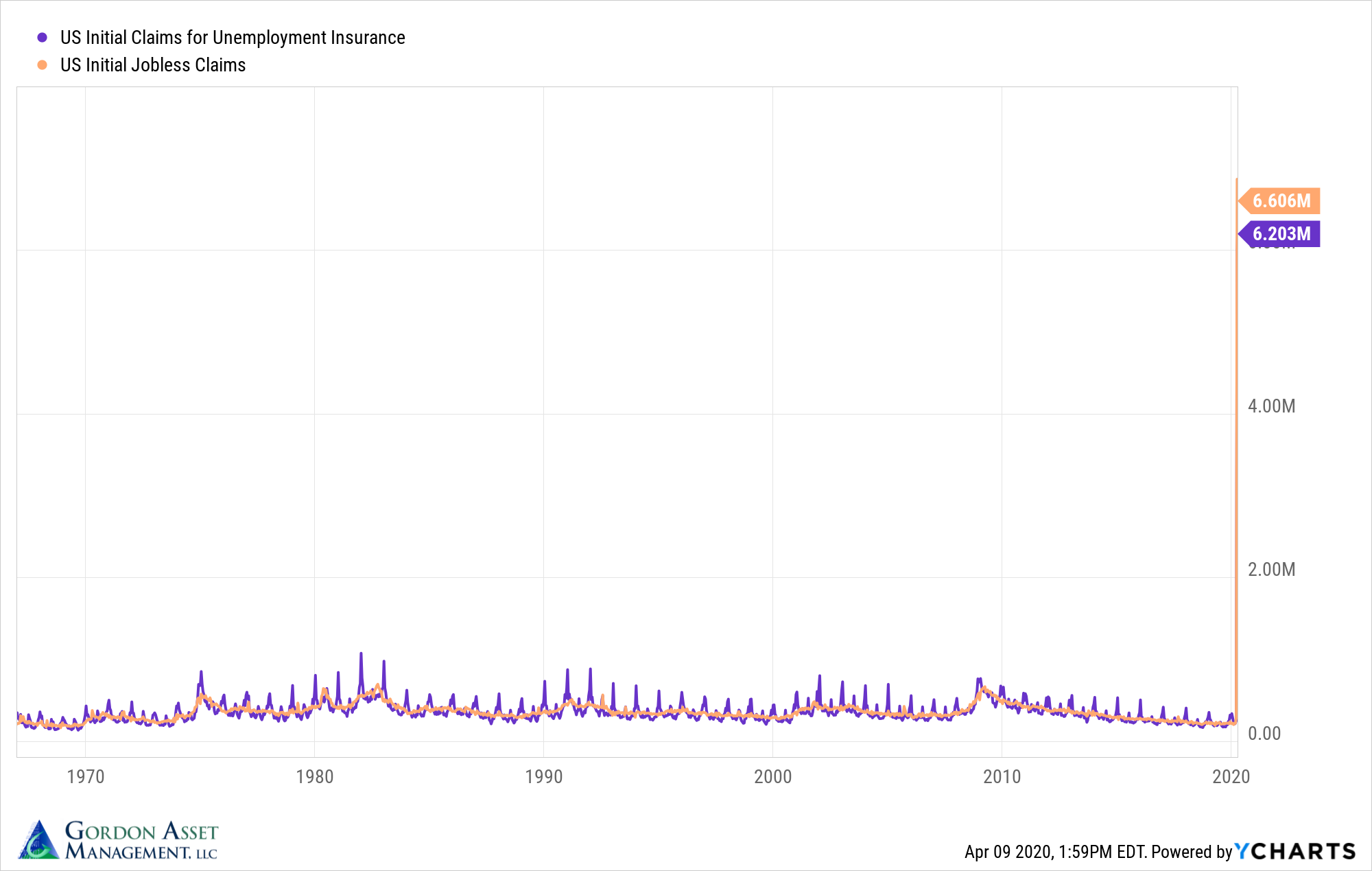 The magnitude of jobless claims in the U.S. has been unprecedented.  This has prompted the Federal Reserve and Congress to deploy aggressive stimulus to help dampen the blow on the demand side (for those that are unemployed) and on the supply side (via grants, loans and other measures to help prevent businesses from closing their doors).

The Economic Impacts of Social Isolation are Yet Unknown

There are few periods in history that have had left such a mark on a handful of generations as the global COVID-19 pandemic will have on ours.  Not only has the spread been anything unlike we’ve seen since the Spanish Flu in 1918, but we have just gone through the most volatile quarter for global stock markets, ever. 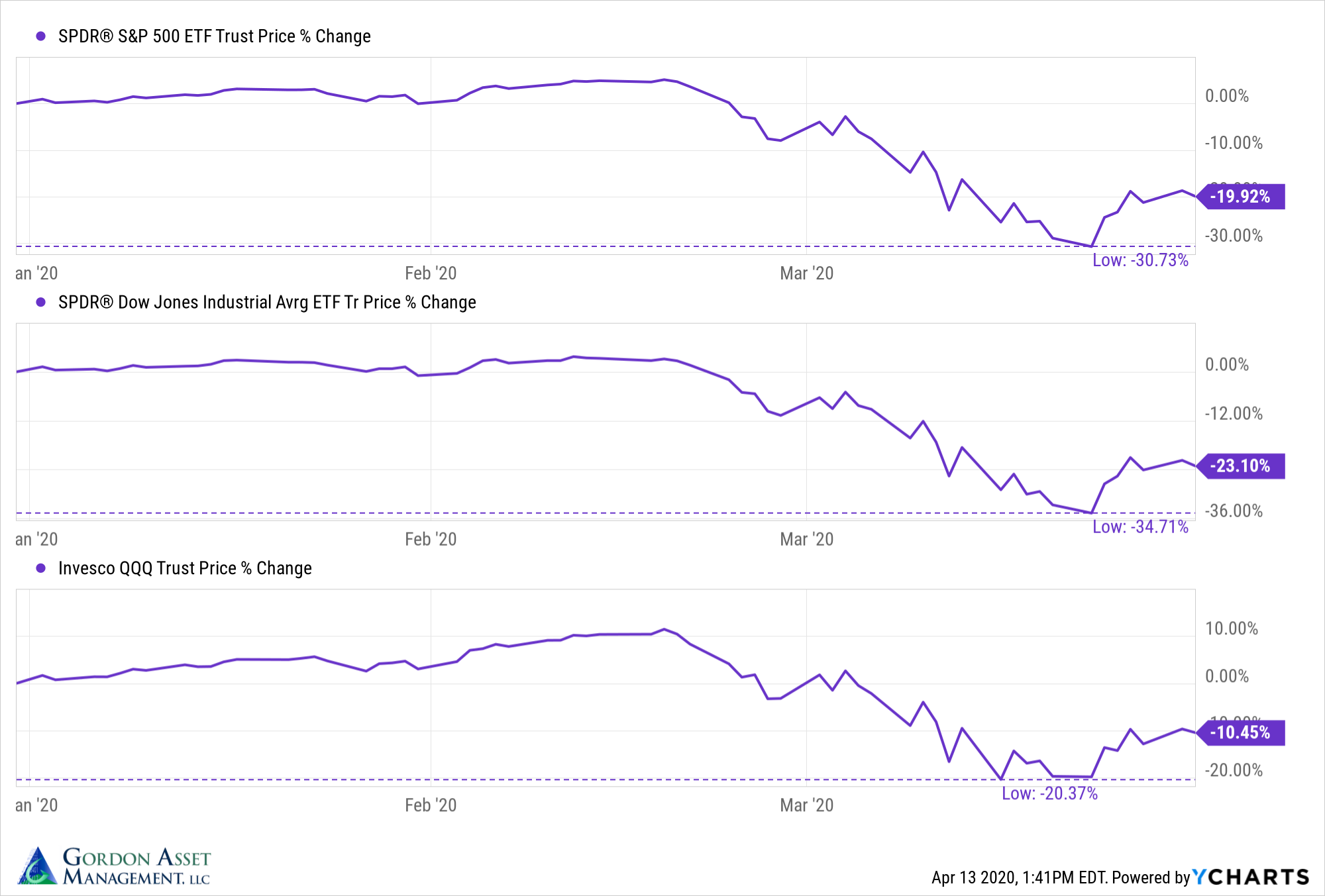 Volatility has been historically elevated as well.  The chart below shows the daily price return for the S&P 500.  In normal volatility environments, you can see that returns fluctuate between 1% to 2%, for the most part, on the positive and negative side.  However, during periods close to recessions (shaded areas on the chart) volatility can go to extremes.  We had our largest single decline in a day for the S&P 500 this past year, posting a one-day decline of nearly -11%. 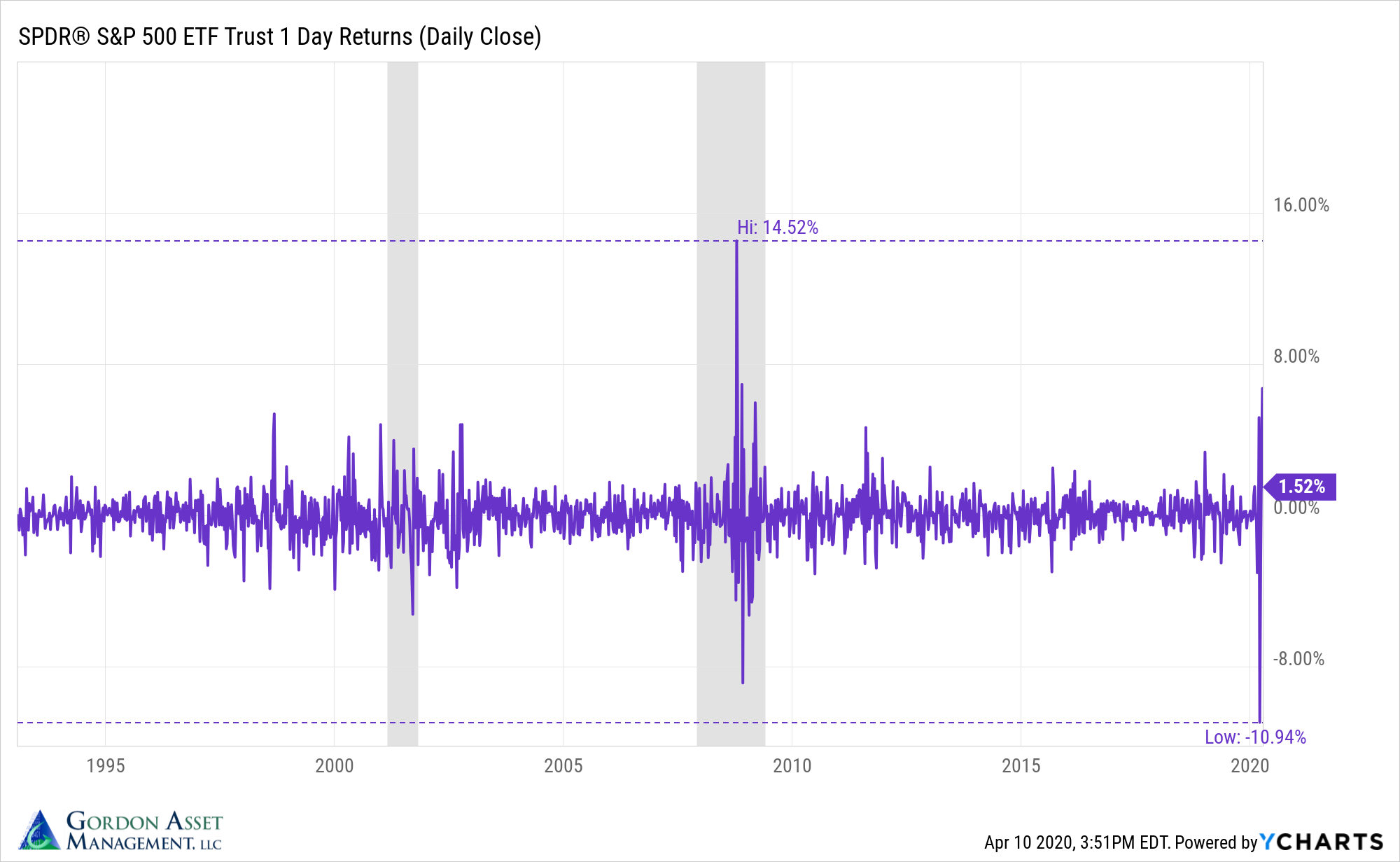 As markets digest the full blow to the economy, we could continue to see elevated volatility into the 2nd quarter and 2nd half of 2020.  Uncertainty surrounding when the virus will plateau, re-opening of the economy and God forbid any reemergence of the virus will certainly have an impact on how markets react in the back half of the year.

Positioning for the 2nd Quarter of 2020 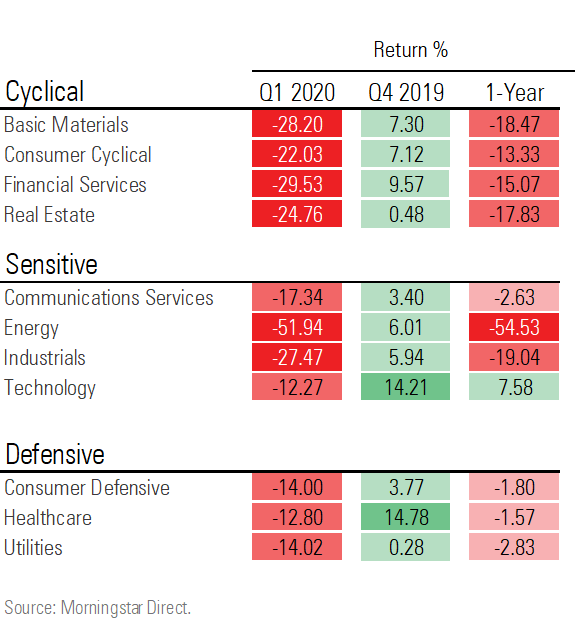 Our view is with interest rates persistently low and with the risk of volatility rearing its ugly head, staying defensive in this environment makes sense.  This includes an emphasis on the sectors and factor exposures we listed on the equity side of the portfolio and making sure our exposure on the bond side of the portfolio includes high quality US Treasuries and minimal exposure to low quality junk bonds.  We also think that keeping cash on hand to put to work during periods when markets are selling off is a prudent action.

We would like to share some thoughts from the most recent letter penned by Howard Marks, Oaktree Capital, L.P.’s Founder and Co-Chairman.  For those of you that don’t know Howard, he is likely the greatest investor you’ve never heard of and one of the most thoughtful writers and minds in our industry.

In his letter, to paraphrase, he talks about the illusion of knowledge of the future, as it relates to the coronavirus pandemic and as it relates to financial markets.  He goes on to write:

“…there are (a) Facts, (b) informed extrapolations from analogies to other viruses (periods of market history) and (c) opinion or speculation.

…To follow [this] analysis, in our world of investing:

Tying this framework back to where we are today, Marks continues:

“What does the U.S. see today?

…In short, it’s my view that if you’re experiencing something that has never been seen before, you simply can’t say you know how it’ll turn out.”

In our age of 24/7 news cycles and so many so-called “experts” offering their opinions as fact, it’s easy to become distracted by the noise.  Our job is to help cut through the noise and confusion.

Please feel free to call or email us with questions.